The rulebook Navarchus can be found here:

The rulebook Navarchus in colour can be found here:

The Navarchus Templates can be found here: 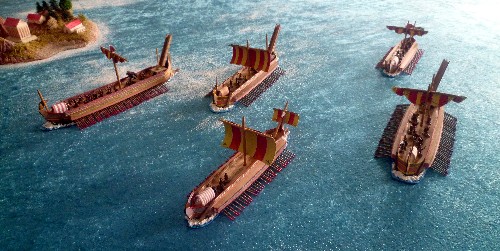 
Thursday, 6 March 2014 New 1/300 Rules.
Richard Evers, a Dutch wargamer and Author from club Militia Brabantia has published new rules for 1/300 galley warfare.
The rules are for larger models than I have now decided in favour of and thus are for skirmishes and smaller actions as are Eric Hotz's. They use Bacchus miniatures and seem to be sponsored by this company which produces a wide range of suitable miniatures. As he states, he loves the idea of manoeouvre between galleys and the move is suimultaneous, using templates to simulate the capabilities of ancient galleys.
Here is the link to get a taste of the rules online and buy them. They can be purchased in b/w or colour and a template set is available seperately. It is interesting for me to see a set with movement templates when I have myself spent a lot of effort to develop templates for use with models but decided at last that they were unecessary and they went onto a darkly smoking acetate funeral pyre with few tears shed over them. The cost is v. reasonable for the b/w set and goes against the current terrible trend for expensive rules full of unnecessary colour fotos but if you like the fotos you can choose to pay more and get them. I may buy them and review them but I have gone through a process of deciding that this scale is not for me. It is great for deck fighting in detail and skirmishes but does not allow a real fleet action in my opinion. I also think that simultaneous movement is actually unrealistic for sailing / rowing actions..but that does not stop it making a good game.
I think the customised Hotz ships he uses look great for these battles.I am also in favour of NO HEXES !..great.
I hope these rules raise some more interest for galley warfare. !!

If you have any comments on the rules, suggestions or if anything is unclear in the rules, don't hesitate to mail me.

I hope you enjoin the game as much as I do.